Is It Dangerous If The Pilot Light Goes Out On The Water Heater?

It’s frustrating when the water heater pilot light goes out every few days but is it also dangerous? Well, yes, and no. It would essentially depend on whether the thermocouple is working correctly. Let’s rewind to the start to understand this better. The thermocouple is a device on the gas heater that senses the pilot’s heat and feeds it gas.

The pilot light will be cut if it’s malfunctioning because then it will cut the gas to the pilot. When the thermocouple is functioning properly, the gas is cut off on its own. This would mean that when it’s not functioning correctly, there’s a dangerous potential of gas leak in the room where the heater is located.

Common Reasons Behind The Pilot Light Going Out

Faulty Thermocouple: The thermocouple, as explained above, exists to sense if the pilot light is lit. When it is not lit, the device shuts the gas supply off, preventing any danger and maintaining safety. However, the thermocouples in many older heaters start malfunctioning. A faulty thermocouple would shut off the gas supply to even a burning pilot light, which would result in cold water for you.

Dirty Thermocouple: Another thing that you must look out for is the buildup of dirt in your thermocouple since that would prove to be a hindrance for the thermocouple to sense the flame of the pilot light. Similar obstacles occur when the device is bent away from the flame, and the gas supply is shut off even then.

Insufficient Combustible Air: With a lack of combustible air, the pilot light of your water heater is likely to go out. This toes into the category of dangerous, since such situations may result in Carbon Monoxide buildup. This can happen when the water heater’s location does not have enough combustible air, for example, in a utility closet. If the pilot light has gone, it would be better to check the situation.

Blown Out Flame: A strong wind may be the cause behind the pilot light of your water heater going out. The flame may be blown out due to the absence of a sealed combustion chamber.

What Should You Do In Such A Situation?

Are you wondering if the pilot light goes, will gas leak? You must check this. If the pilot light in your gas water heater keeps going out, the first thing you should do in such a situation is check for a gas leak.

This is not a difficult task, and you can find out if there is any gas leak quickly enough. If you smell something terrible -something like rotting eggs -upon sniffing in the area where the heater is located, you have detected a gas leak.

This is how natural gas smells, and once you notice it, you must turn off the gas to the heater. Before taking such a dangerous matter into your own hands, try contacting the gas company, and wait for their instructions. Caution is recommended, and if you smell the gas, you should ideally call the gas utility and leave the house.

There are cases where you don’t need to contact the company –when there is no gas leak detected. Since the danger of a gas leak is out of the way, you can relight the pilot, and the problem will be solved in a few minutes. However, you must ensure that there is no gas leak present, and only after that, should you follow the next steps.

In case you do not know where the temperature control gauge is, or what it looks like, look for a box-shaped surface outside of your heater. The temperature gauge must be located there. You will find the on and off knob above it, along with a ‘pilot’ setting. At the top of the same structure, there is a regulator valve present.

You need to turn the temperature down, and then go for the ‘off’ setting of the gas knob. The next ten minutes should be for letting the heater rest without any disturbance. During this period, the gas, if any, that was in the room will be dispersed, and you can safely go ahead with relighting the pilot.

For lighting the pilot, you need first to find out whether your heater is new or old. With old heaters, you can relight the pilot by putting fire to it. But it’s advisable to first check with the company before you light the fire. Using a lighter or a match can be extremely dangerous and may lead to the person lighting the pilot in getting burned.

It can be especially hazardous since this space can be very tight, and that’s why you should use a wand lighter instead. Before using a wand lighter to relight the pilot, you need to first turn the gas valve to the ‘pilot’ position. After the pilot is lit, you must wait for a full minute and ensure that the pilot will stay lit before releasing the regulator valve.

This hassle is not necessary with newer models, since they have an ignition switch present. Relighting the pilot in the more modern water heaters is very easy compared to their older versions. The switch decreases the danger of any unsafe scenarios, unlike manual relighting of the pilot.

Get The Heater Repaired

While water heaters are meant to last for many years, they may stop functioning correctly without proper maintenance. If any such malfunction has been evident to you, you need to get it repaired. The pilot light going out can indicate that the functionality of your water heater has begun to worsen, and you need to either replace it or buy a new one. 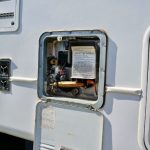 Should You Leave The RV Water Heater On All The Time? 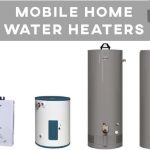